Ho Chi Minh City: Viettel FC may have kicked off their AFC Cup™ 2022 Group I campaign with a resounding win but head coach Bae Ji Won was far from satisfied.

Viettel found themselves trailing to Young Elephants FC of Laos six minutes into the match but a Pedro Paulo hat-trick and efforts by Hoang Minh Nguyen Duc and Manh Dung Nham saw them ultimately cruise to a 5-1 win. 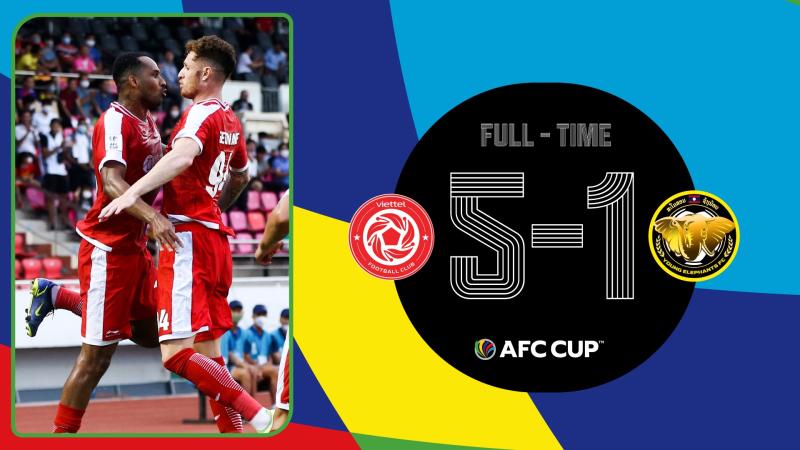 Ho Chi Minh City: Vietnam’s Viettel FC romped to a 5-1 victory against Laos’ Young Elephants in the opening match of Group I of the AFC Cup™ 2022 on Friday.

Brazilian forward Pedro Paulo was the star of the show on home soil, registering a hat-trick while Hoang Minh Nguyen Duc and Manh Dung Nham added the other two. Ho Chi Minh City: Viettel FC are expecting only a win when they open their AFC Cup™ 2022 Group I campaign against Young Elephants FC on Friday.

Despite playing in Ho Chi Minh City, the Hanoi-based Vietnamese side will have 'home ground' advantage against their opponents from Laos and coach Bae Ji-won has urged them to maximise the opportunity as the ASEAN Zone of the AFC Cup returns after two years. Kuala Lumpur: Jeonbuk Hyundai Motors breathed new life into the K League 1 title race as a 3-1 win over runaway leaders Ulsan Hyundai on Sunday cut the lead at the top to seven points.

There was little change in Japan’s J1 League as the top four all won to mean Yokohama F. Marinos remain a point clear, while Wuhan Three Towns stay ahead of the rest in China PR and Sabah moved out in front in Malaysia.

Elsewhere, there was action in Singapore, Mongolia, Laos, Macau and Chinese Taipei so join the-AFC.com as we review the leagues from across East and Southeast Asia. While the majority of leagues across the region are on an international break, there were J.League Cup games in Japan and fixtures in both Laos and Macau, so join the-AFC.com as we look back on the action. Kuala Lumpur: Western United were crowned A-League Men champions for the first time after a 2-0 victory over Melbourne City in the Grand Final on Saturday continued the remarkable rise of a side that has only been in existence since 2018.

In Thailand, Buriram United brought the curtain down on an incredible season as their 4-0 win over Prachuap on Sunday saw them add the League Cup to the Thai League 1 and FA Cup titles to complete the treble for the fourth time.
Elsewhere, Phnom Penh Crown enjoyed League Cup glory in Cambodia, while there were games in Singapore and Laos. The-AFC.com looks back at the action from around ASEAN. Kuala Lumpur: Buriram United defeated Nakhon Ratchasima to add the Thai FA Cup to their Thai Premier League title after a 1-0 win in extra-time on Sunday.

Meanwhile the identity of Australia’s Grand Final opponents has been decided, while there was action from the top flights in Singapore and Laos. Read on for the-AFC.com’s wrap of the best of the action from across ASEAN. Hanoi: An own goal secured Thailand a 1-0 win over Laos in Group B of the Hanoi Sea Games men’s football at the Thien Truong Stadium on Monday.

The result meant Thailand finished on nine points, one ahead of Malaysia, who were held to a 2-2 draw by Cambodia.

Thailand, champions a record 16 times, will face Indonesia in the semi-finals, while Malaysia will take on Group B winners Vietnam.

Kuala Lumpur: Western United and Adelaide United secured the wins they needed over the weekend to join Melbourne City and Melbourne Victory in the A-League’s Finals Series semi-finals as the four teams get set to battle it out in the end-of-season showpiece event.

Johor Darul Ta’zim returned to league action in Malaysia with a record-breaking win, while the leaders won in Singapore and there was action in Laos. The-AFC.com reviews the fixtures from around ASEAN.