KL City completed an incredible run to the final on their continental debut, becoming only the second Malaysian side to reach an AFC Cup final after Johor Darul Ta’zim who won the title in 2015, but Hodak highlighted a key difference between KL City’s success and that of his former employers. 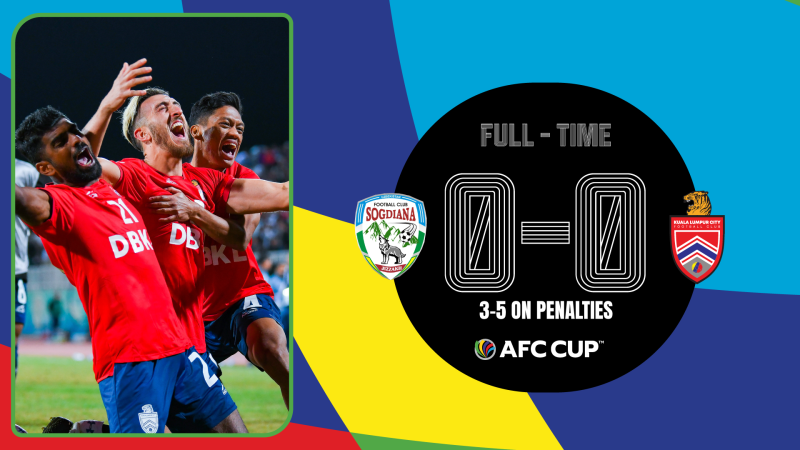 Jizzakh: Kuala Lumpur City FC made history, reaching the AFC Cup™ final on their debut after defeating PFC Sogdiana 5-3 on penalties after 120 minutes ended goalless at Jizzakh Sports Complex in the Inter-Zone Final on Wednesday.

Malaysia's KL City set up a date with Oman’s Al Seeb in the October 22 final with both sides hoping to be crowned continental champions in their maiden AFC Cup appearance.

The final will be hosted by KL City. Muscat: Al Seeb Club’s historic progress to the AFC Cup™ 2022 final is a watershed moment, according to head coach Rasheed Jaber who paid tribute to his predecessors following the club’s 4-0 victory over Al Riffa in the West Zone final on Tuesday.

Jaber’s men became the first-ever Omani side to reach the final, and did so in style, putting Bahrain’s Al Riffa to the sword with an emphatic victory.

At a packed Seeb Sports Complex, the home side missed chances right, left and centre before they could finally open the scoring two minutes into the second half through Abdulaziz Al Muqbali’s tap-in.

When it rained, it poured for Al Seeb as substitutes Ahmed Al Siyabi and Cosmos Dauda got on the scoresheet either side of Salah Al Yahaei’s cool finish through the goalkeeper’s legs in what proved to be a one-sided second half. Kuwait City: Islamic Republic of Iran are two matches away from defending their AFC Futsal Asian Cup™ title, but have been warned to expect a fired up Thailand in the semi-finals on Thursday.

Iran have been in impeccable form as they bid for a record-extending 13th title but twice runners-up Thailand are also bidding to create history in Kuwait 2022. Kuwait City:  It will be a battle of familiar foes when Uzbekistan and Japan face off in the AFC Futsal Asian Cup™ Kuwait 2022 semi-final on Thursday.

There is a rivalry between the two teams, having met in seven previous editions with Japan coming out on top with five wins. Kuala Lumpur: Matchday Three of the AFC U17 Asian Cup™ 2023 Qualifiers lived up to expectations with thrilling action with all 10 groups in action.

The teams will be back on Friday as we get closer to identifying the 10 group winners and six best runners-up who will advance to the Finals.

Stay updated on all the action with the-AFC.com.