Kuala Lumpur: Member Association (MA) development has been one of the core focus areas of the Asian Football Confederation’s (AFC) Vision and Mission and the last 12 months have witnessed the introduction of a plethora of new and improved MA Development Programmes.

The AFC Financial Assistance Programme (AFAP) has risen to USD500,000 in 2019 – an increase of 100% from 2018 – and will be distributed in two instalments to eligible MAs, who can then utilise these funds to achieve their goals and objectives.

A minimum of 10% from the AFAP must be distributed to drive Women’s Football/Women’s Futsal, Coach Education and Youth and Grassroots programmes, which further underlines the AFC’s Vision and Mission of promoting the sport at all levels.

Recognising the need to build more football infrastructure, the highly-acclaimed Mini-Pitch scheme under the AFC President’s Infrastructure Initiative has been discontinued and MAs can now utilise the increase in contribution of USD 800,000 over the period of 2019-2020 for any infrastructure investment including mini-pitches. 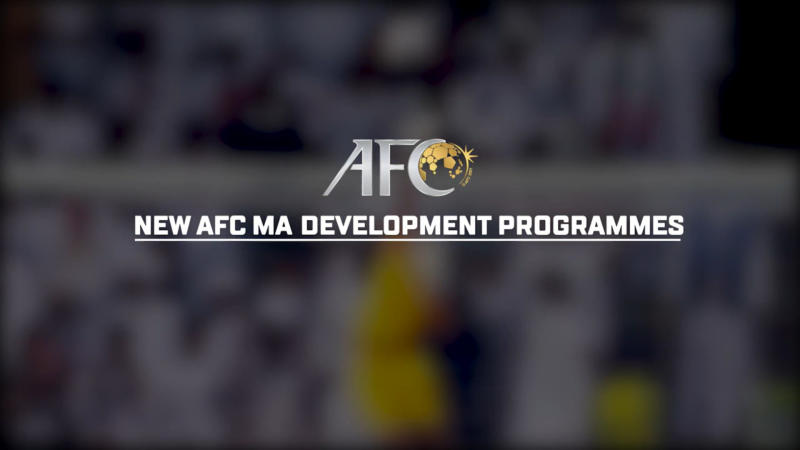 The seminar was organised by the AFC for Local General Coordinators, Match Commissioners and clubs participating in the national league and aimed to provide knowledge on professional match organisation and sharing of best practices among current and potential Match Commissioners.

The AFC team's visit to Turkmenistan under the AFC League Development Programme also aimed to create a pool of at least ten Match Commissioners and a Venue Director who meet AFC standards by March 2017.

A practical session was then organised at the home stadium of FC Altyn Asyr during a national league game, where the seminar participants were asked to use the information received earlier to check whether the Local Organising Committee (LOC), clubs and other officials had followed correct matchday organisation practices.

A debriefing session was also organised during which Luzanov provided his input on various areas that needed to be improved upon by both the LOC and match organisers.

Feedback was obtained from the participants on their observation about the organisation of the match before comparing it to what they had learned.

From next season, the Football Federation of Turkmenistan (FFT) will appoint Match Commissioners for league matches.

The FFT has also requested assistance in league and club marketing initiatives through the AFC League Development Programme. A marketing seminar for the FFT and clubs has also been planned. Dushanbe: Security officers from clubs in the Tajik League and from the Tajikistan Football Federation together with stakeholders such as stadium managers and police officers have learnt about best practices in a stadium and security workshop organised by the Asian Football Confederation (AFC).

Thursday’s workshop was carried out under the AFC League Development Programme, Project Tajikistan in the country’s capital Dushanbe.

Alisher Urunov, Director General of the national league, welcomed the participants and thanked the AFC for the initiative to offer training in specific activity areas, with an AFC media and communications workshop having been organised the previous day, under the same programme.

The AFC club licensing regulations were introduced in 2015 under the AFC League Development Programme. The regulations require clubs to have a dedicated security officer. With the clubs in the Tajik League having appointed these staff members, the AFC stadium and security workshop offered them the opportunity to learn about their role and tasks in their clubs as well as AFC competitions.

The objective of the session was to inform the participants about stadium and safety requirements under AFC club licensing and their role in ensuring safety at football matches. The workshop was attended by 19 participants. The issues discussed included decision-making in security matters and the relevant AFC and FIFA regulations.

Specific security situations in club and national team matches in Asia and around the world were looked at in detail through videos and case studies, with different categories of risk situations identified. The role of the security officer in these situations and the impact of other related match operations areas, such as ticketing and access control, were also studied. The importance of planning, risk assessment, communication and coordination and contingency plans were underlined throughout the workshop.

The AFC will now discuss further with the Football Federation of Tajikistan with a view to launching a development programme in the country for stadium and security, as is the case in Malaysia, the United Arab Emirates and Islamic Republic of Iran, where similar workshops have been carried out previously. On the back of long-term collaboration between the Asian Football Confederation, Sportradar Security Services and the Nepal Police, the Kathmandu Valley Metropolitan Police Crime Division arrested five Nepali players, former and current, linked to match-fixing this week.

Acting General Secretary of the Asian Football Confederation Dato’ Windsor John said: “The AFC adopts a zero tolerance policy towards match-fixing and a 360 degree view on the issue through a strategy of prevention, detection and response. These arrests show that the strategy is working. We applaud the Nepali Police for their reaction to the information and intelligence we have generated in partnership with Sportradar”.

Sportradar Managing Director Security Services Andreas Krannich said: “In the last few years our Fraud Detection System reports have been integral to over 100 arrests worldwide around match-fixing and manipulation so we are proud to see our reports and intelligence services continue to make a difference in countries that love and cherish sport. But our work is only as good as the stakeholders who receive the reports and intelligence. So we are even more proud of the commitment and work of the AFC and the Nepali Police. They have laid down a clear marker to all those passionate about Nepal and Asian football that match-fixing is taken seriously and those that want to perpetrate it will not go unpunished.”

The process leading to the arrests began when suspicious betting patterns were detected on a number of matches played by the Nepali national team. A year-long investigation followed, involving matches stretching back to 2008 with further intelligence gathering revealing suspicious financial transactions linked to Nepali nationals. The intelligence gathered was shared with the Nepali Police and a formal investigation began which has so far resulted in five arrests. The AFC will launch the appropriate disciplinary proceedings in due course.

Having led the arrests, Kathmandu Valley Metropolitan Police Senior Superintendent of Police, Crime Division Sarbendra Khanal said: “This is an important week in how Nepal presents its stance on match fixing. We extend our thanks to Sportradar and the Asian Football Confederation for the information and intelligence that they unearthed. We have worked tremendously well together to date and I am confident we can continue to work effectively going forward”. Presidents, General Secretaries and Technical Directors from 12 Member Associations were in attendance for the three-day seminar in the
Malaysian capital city.

AFC Member Associations and Development Director Sanjeevan Balasingam made a presentation to the delegates on Integrity in Football, an
integral part of the AFC President's Initiatives, while the AFC Head of Development, Stuart Larman, explained the AFC Kick Off development
programme.

In his presentation, Balasingam explained that match fixers can reach players - including young ones - referees and their assistants, coaches
and managers, players' agents, club owners, football administrators and national football associations.

He also revealed the ways a match fixer can approach a target such as via a direct approach (gift, money, sexual favour), via an indirect
approach (through family, friends, club ownership, sponsorship), grooming over a long period of time and through threats.

To tackle match fixing, the AFC has devised its Integrity Action Plan which spells out ways to Prevent, Detect and Respond to this menace.

It was also noted that to prevent match fixing, various measures must be undertaken such as improving Governance as well as Raising Awareness and Training. To detect match manipulation, a monitoring and reporting mechanism is being implemented by the AFC, with a Fraud Detection System and a confidential reporting mechanism in place.

To respond to the menace, the AFC's measures include investigations which push for the development of a thorough investigation strategy
including Standard Operating Procedures. The AFC could also mete out severe sanctions on a continental level against those that have been
proven to have manipulated matches. These sanctions may be extended to have a global effect via FIFA.

Meanwhile, in his presentation, Larman said there are now 20 AFC Member Associations taking part in Kick Off, a tailor-made programme
taking into account the MAs' unique situations.

Larman explained to the delegates the ten services and incentives provided under the programme, and also provided an outline of the
programme's future development which include a Kick Off Academy through which regional seminars will be held for senior management of clubs and leagues as well as, from 2015, a Kick Off Leaders Programme which is a knowledge exchange forum for Presidents and General Secretaries.

Information was also provided on the AFC President's Initiatives such as the Mini Pitch Scheme, the AFC Expert Pool and the Competition Fund, which contributes towards the Member Associations' financial costs in hosting AFC qualifying tournaments. The workshop was organised by the AFC Member Association Development Department for 44 clubs with the attendance of the respective general managers.

A presentation was carried out to cover all the compulsory AFC club licensing criteria that the clubs will have to comply with from 2018, such as having two youth teams, a team doctor or physiotherapist, written contracts for players and more.

A timeline on the objectives and the entire club licensing registration process for the clubs to follow was also explained to the participating club representatives.

Throughout the licensing process, the AFC will continue to support and assist the clubs through the AFC League Development Programme.

The DPR Korea Football Association has plans to create a new league with three divisions in 2017, and it is important for the clubs to comply with the club licensing criteria to ensure the long-term development of football in the country.