Atawi: I knew from day one we could be champions

Atawi: I knew from day one we could be champions

Atawi's charges lifted the trophy after a 2-1 win over Korea Republic on Sunday, ending a 26-year Saudi title drought and marking the most significant achievement in the 41-year-old's highly successful two-year reign as head coach.

Reflecting on his side's triumph, the former Al Nojoom boss said he knew from early in his reign as head coach that he had a special group of players. 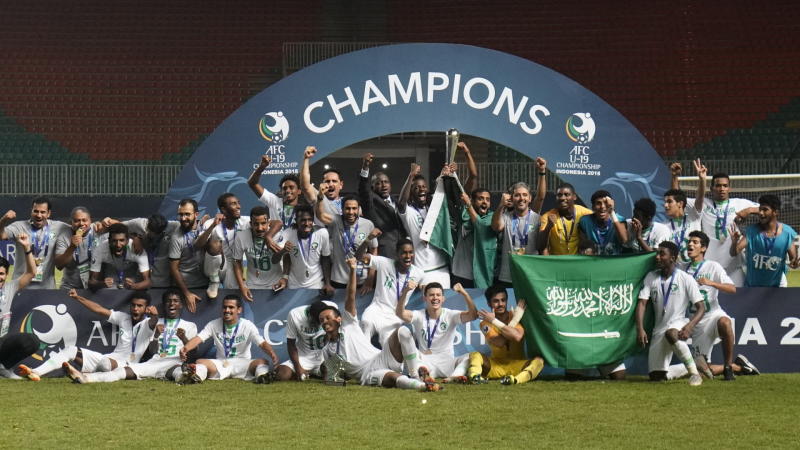 In the two finalists, alongside Japan and Qatar, Asia will be represented by four seasoned challengers in the FIFA U-20 World Cup Poland in May next year, who have collectively featured on the grand stage on 34 occasions.

Shaikh Salman said: “The AFC U-19 Championship in Indonesia has been an incredible success and I want to congratulate Saudi Arabia for shining the brightest amidst a remarkable cast of Asia’s future stars. We must also commend Korea Republic for showing great resolve and character throughout the tournament.

“Along with Japan and Qatar, Asia has four remarkable teams that I am confident will strive to make us proud in Poland.

“Saudi Arabian Football Federation deserves our praise for producing Continental champions who will inspire our youths and instil the desire and willingness to succeed on the world’s biggest stage.” Bogor: Saudi Arabia claimed the AFC U-19 Championship Indonesia 2018 title on Sunday thanks to a hard-fought 2-1 win over Korea Republic.

A scintillating first half display, with the talismanic Turki Al Ammar to the fore, proved the difference at Bogor’s Pakansari Stadium, as the Saudis sealed their third title success at this level, and their first since 1992.

Both sides, along with beaten semi-finalists Qatar and Japan, will now go on to represent the Asian Football Confederation at next year’s FIFA U-20 World Cup in Poland.

Bogor: Victorious Turki Al Ammar revealed his satisfaction at leading his side to the AFC U-19 Championship Indonesia 2018 title, as Saudi Arabia's budding star was named the tournament's Most Valuable Player.

The attacking midfielder lived up to head coach Khalid Abdullah Atawi's pre-tournament challenge to win the coveted accolade, after he helped his side win the competition for the first time since 1992.

Al Ammar's award completes a rare and impressive double for the Al Shabab youngster, who was also voted the Saudi Pro League Young Player of the Season earlier in 2018.

Earlier in the tournament, Al Ammar revealed Atawi had set him the challenge of becoming the competition's best player and the 19-year-old said he was delighted to have achieved the goal.