Todoroki optimistic Thailand will bounce back against Chinese Taipei Todoroki optimistic Thailand will bounce back against Chinese Taipei

Navi Mumbai: Thailand assistant coach Natsuko Todoroki has urged her players to put their 2-0 defeat against Thailand behind them and focus on securing a berth in the FIFA Women's World Cup Australia/New Zealand 2023.

Thailand, still affected by a COVID-19 outbreak in their squad, lost 2-0 to Vietnam in the first tie of the playoffs on Wednesday.
Todoroki’s charges must now win against Chinese Taipei on Friday to keep their FIFA Women’s World Cup qualification hopes alive, while defeat will send them to the Inter-Confederation playoffs. 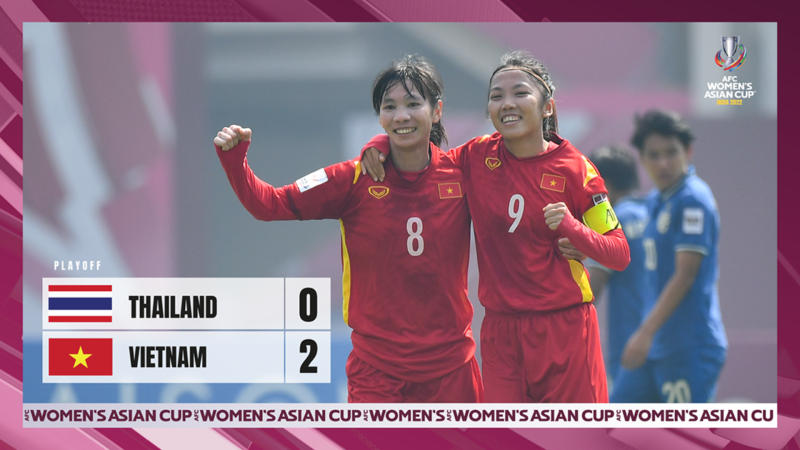 Pune: Korea Republic booked a place in the AFC Women’s Asian Cup India 2022™ final with a comfortable 2-0 win over the Philippines at the Shree Shiv Chhatrapati Sports Complex in Pune on Thursday.

Korea Republic’s first ever appearance in the final was sealed early, with Cho So-hyun and Son Hwa-yeon scoring in the first half for the East Asian side with China PR awaiting them in Sunday's title decider.

The Philippines, playing in their first AFC Women’s Asian Cup semi-final, can be proud of their efforts though as they gave the match their all and can look forward to an inaugural appearance in the FIFA Women's World Cup Australia/New Zealand 2023. Mumbai: As the AFC Women’s Asian Cup India 2022™ enters its final stages, the-AFC.com takes a peak behind the scenes and pays tribute to the volunteers who have helped in the smooth running of the continental showpiece.

With the tournament expanded to 12 teams and numerous SOPs in place due to the COVID-19 pandemic, the dedication of the volunteers has been exemplary.

Volunteers Akankshya Bhuyan and Devika Nair are just two of many who have played a major part in the AFC Women’s Asian Cup India 2022. Both sides come into the tie having won 10 titles between them, with China PR chasing a record extending ninth while Japan are two wins away from winning a hat-trick of AFC Women’s Asian Cup crowns.
A win for the Steel Roses will bring Shui’s charges closer to the title they last won in 2006, while Japan are aiming to become only the third team to win three consecutive titles.

Abu Dhabi: Hosts Al Jazira and 2021 AFC Champions League winners Al Hilal SFC prepare for their second appearance at the FIFA Club World Cup as the competition gets underway in the UAE capital on Thursday.

Japan’s Kashima Antlers (2016) and UAE’s Al Ain (2018) produced the best results in the competition for AFC sides, finishing as runners-up, while five other teams won bronze medals, setting the mark for the two participants this year to reach. Baghdad: Iraqi Football Association announced on Wednesday that they have decided to dismiss Montenegrin Zeljko Petrovic as head coach following the recent poor results in Group A of the AFC Asian Qualifiers - Road to Qatar.

The decision came less than 24 hours after Iraq’s 1-1 draw with Lebanon on Matchday Eight of the AFC Asian Qualifiers - Road to Qatar at Saida Municipal Stadium. Riyadh: Saudi Arabian Football Federation announced on Wednesday that they will be missing the services of Abdulellah Al Malki for an extended period after the midfielder suffered an anterior cruciate ligament injury.

The 27-year-old Al Malki was substituted in the 23rd minute of Saudi Arabia’s match against Japan on Matchday 8 of the AFC Asian Qualifiers - Road to Qatar on Tuesday.