Kuala Lumpur: The Bhutan Football Federation (BFF) is the latest Member Association (MA) to be endorsed as a full member of the Asian Football Confederation (AFC) Elite Youth Scheme for its comprehensive youth development plan and structured competition system.

With the aim of supporting the development of each individual player and raising the standard of their performance, BFF’s efforts are focused on youth coach education, youth competition and strong partnerships with local clubs and national teams. 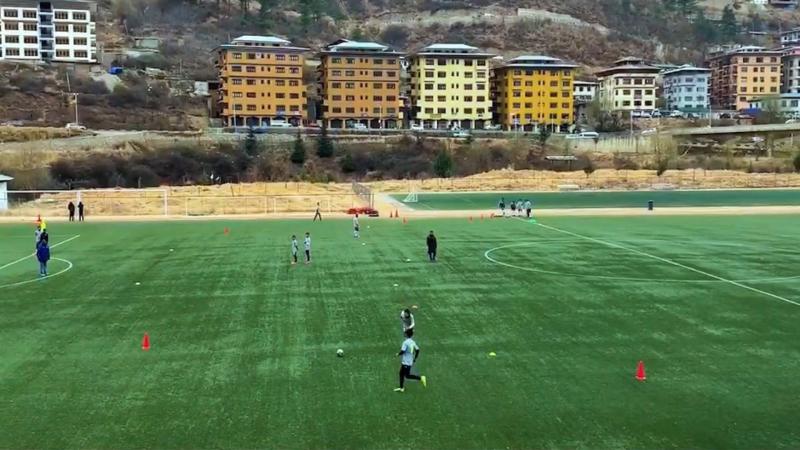 Thimphu: Five continents are represented in the 10 countries with the highest average elevation, but do you know which domestic league is played at the highest altitude? The answer is the Bhutan Premier League, the national competition of the mountainous kingdom of 740,000 inhabitants with an average elevation of 10,760 feet.

A small landlocked country in South Asia located in the Eastern Himalayas, Bhutan has managed to maintain a unique national identity.

Most matches are played at their Changlimithang Stadium, with its Bhutanese architectural features emblematic of the nation’s distinctiveness. The prestigious award is given to a Member Association in recognition of its professional administration and governance as well its exceptional contribution to the development and promotion of the game at all levels within the country.

Recognising the diversity of MA’s in terms of facilities and resources and looking to ensure that more nations will receive recognition for their efforts and achievements in developing football in their country, the AFC in 2013 introduced three winners for the Member Association of the Year award as opposed to just one.

The AFC’s 46 Member Associations are divided into three categories namely ‘Inspiring’, ’Developing’ and ‘Aspiring’ based on their overall footballing prowess.

Member Associations are assessed and awarded points on various areas encompassing the association’s activities such as the organisation of courses and seminars, competitions, grassroots and youth development, women’s programmes, social responsibility and special projects.

Points are also given for an MA’s hosting of AFC qualifying and finals tournaments as well as their national and club teams’ placing in AFC and FIFA competitions throughout the year. Thiruvananthapuram: Bangladesh finished their 2015/16 SAFF Championship campaign on a positive note following a 3-0 win over Bhutan.

Following defeats to Afghanistan and the Maldives in their opening two Group B games, Bangladesh entered Monday’s clash at the Trivandrum International Stadium with their hopes of advancing to the semi-finals already over.

Nonetheless, they still showed plenty of endeavour to sign off on a high and duly took the lead after eight minutes, when defender Topu Barman popped up at the other end to net with a close-range header.

Bhutan’s hopes were dealt another blow in the 22nd minute when Chimi Dorji was sent off for a last-man foul on Hermanta Biswas, and the Bengal Tigers duly doubled their advantage as Shakhawat Rony converted the resultant penalty.

From then on, Bangladesh never looked in danger of relinquishing their lead but, just for good measure, Rony grabbed his second of the afternoon seven minutes after the hour mark to seal a commanding win for his side.

The result saw Bangladesh seal a third-place finish in the group, ahead of Bhutan, who finished with three defeats in as many games. Thiruvananthapuram: Afghanistan booked their place in the semi-finals of the 2015/16 SAFF Championship with a 3-0 over Bhutan on Sunday as the defending champions won the second of their three Group B games.

Buoyed by a resounding 4-0 victory over Bangladesh in their tournament opener on Thursday, the Afghans eased to their second straight win at the Trivandrum International Stadium with a Khaibar Amani double and a Masih Saighani effort seeing the Afghans join the Maldives on six points, with the Indian Ocean islanders picking up their second win after defeating Bangladesh 3-1 in the earlier fixture.

Afghanistan needed just 15 minutes to score their fifth goal of the tournament when Noraollah Amiri fed the ball to Hassan Amin, whose cross into the box was slotted home by Amani before the title holders ensured they would take a two-goal cushion into the interval when Saighani headed home Kanschika Taher’s free-kick on the stroke of half-time.

The influence of Afghanistan’s Europe-based contingent continued when the Afghans scored their third goal of a match they dominated from the outset, with SC Hessen Dreieich striker Amani heading home his tournament-leading third of the campaign, with the 28-year-old knocked in a 53rd-minute cross from Noraollah Amiri, who plays his club football in Sweden with second-tier side Trelleborg.

The group phase of the competition concludes on Monday when the defending champions face the Maldives in a top-of-the-table decider, while Bhutan battle Bangladesh as both sides look to pick up their first points and exit the competition on a positive note.

Thimpu: The Bhutan Football Federation (BFF) has received 5,200 ultra durable balls in a bid to boost grassroots football and social development activities through the game in the South Asian nation.

A three-day grassroots festival was held on April 9 to mark the event involving more than 300 boys and girls aged between five and 12 from urban and rural areas.

Chief Justice of Bhutan His Excellency Tshering Wangchuk launched the event and thanked the AFC, the Asian Football Development Project (AFDP) and One World Play Project (OWPP) for the donation.

“I believe thousands of children will benefit tremendously from the donation especially in the rural areas in Bhutan,” he said. “Also, the recent success of the Bhutan national team in moving up significantly in the FIFA ranking has given new hope and new dreams to the young children.”

The launch event saw grassroots football clinics organised for boys and girls by Bhutan Football Federation (BFF) grassroots coaches with Bhutan national team players also invited to the event. Vaidehi Vaidya appeared at the event on behalf of the AFDP.

Ugyen Wangchhuk, BFF General Secretary, thanked the AFC for initiating the balls donation project in Bhutan, and ensured that the balls would be used in many ways to develop football especially at the grassroots level.

Dr. Annathurai Ranganathan, AFC Head of Social Responsibility and representative at the event, said the BFF is one the recipients of the excellent ball donation partnership between the AFC, the AFDP and OWPP. He also thanked the BFF for being actively involved in grassroots football development and thanked them for inviting the national players to be part of the event.

On April 10, the durable balls were donated to two schools – the Drak Tsho Special Needs Children’s Vocational School and Kuzugchen Middle School, an institution located in a rural mountainous area in Taba.

The ultra-durable balls, which do not need a pump and never go flat, can withstand the toughest environments and last for years without maintenance. Thimpu: Bhutan’s efforts in line with the AFC’s focus on grassroots this year are in full swing as the football federation has organised programmes in 10 districts with provincial and national-level activities to be held until the end of the year.

A total of 198 coaches and 3,950 children including 1,172 girls took part in the grassroots programmes held in the districts of Phunakha, Gelephu, Bhumthang, Samtse, Paro, Thimphu, Samdrupjongkhar, Phuntsholing, Mongar and Tashigang.

The Bhutan Football Federation (BFF) is also planning to organise provincial U-13 festivals in September and national-level festivals in December,” Chokey Nima of BFF told the AFC.

“The aim of the programmes is to assist in the current and future coaching plans and provide meaningful, appropriate and enjoyable training sessions for children between the ages of six to 12.

“The advice and information provided are based on programmes that have been successfully carried out internationally for young players. The contents are broadly stated and reflect that rationale of the grassroots and youth level that focuses on the specific needs, limitations and capabilities of young boys and girls, who during that stage of development play football purely for enjoyment.

“BFF believes that the game of football provides boys and girls with a foundation to establish unique social skills, a healthy lifestyle and positive personal experiences. In other world, football is a school of life!,” Nima concluded.

The AFC has designated this year as the AFC Grassroots Year, aptly themed ‘Let’s Play!’, and is encouraging Member Associations to organise activities to promote and emphasise that football is accessible and socially beneficial to everyone and that a strong foundation will allow players to progress to the elite level.

Kathmandu: After conceding 15 goals in their opening match against Tajikistan, Bhutan yet again conceded 14 to table toppers Afghanistan in the AFC U-14 Championship 2014 Group C qualifiers on Thursday.

In their 14-0 win over Bhutan at the Dashrath Stadium, the Afghans’ captain Abdul Naser smashed four goals. Omid Haider and substitute Elyas Amiri notched a brace each while Amanullah Qazi, Murtaza Qambari, Ahmad Mubasher and Mujtabaa Rezaie also registered their name in the scoresheet.

Afghanistan currently top the four-team table with maximum six points after beating hosts Nepal and Bhutan. However, they are not yet through with their vital tie against second-placed Tajikistan, who were held by Nepal 1-1 on the same day, coming on Saturday.

A draw is enough for Afghanistan to progress in the next year’s tournament proper but a defeat means Tajikistan finish at the top of Group C.

Kuala Lumpur: Ten districts in Bhutan have been earmarked by its football association to celebrate the AFC Grassroots Day 2013 which falls on 15 May.

The Bhutan Football Federation (BFF) has informed the AFC that it recognises the importance of grassroots football and therefore will celebrate the occasion by having programmes in the 10 districts.

"We will be celebrating in 10 districts with the involvement of all stakeholders and communities in those regions," said Chokey Nima of BFF. "Our focal persons and trained grassroots coaches will be executing the programme and it will be done as per the grassroots mandates.

"We will be doing these grassroots programme with the following philosophies: football for all, early football playing opportunity, fun and enjoyment oriented football, let kids learn by playing games, teach life skills and give exposure besides football and football by all – involving all stakeholders and at the end making the community realise a better purpose in life through this beautiful game."

The AFC has designated this year as the AFC Grassroots Year, aptly themed ‘Let’s Play!’, and is encouraging Member Associations to organise activities to promote and emphasise that football is accessible and socially beneficial to everyone and that a strong foundation will allow players to progress to the elite level.

The AFC Grassroots Day coincides with the International Family Day and will be celebrated throughout the week or other times suitable for the MAs.

At the continental level, a three-day seminar will be held from 15 to 17 May in Kuala Lumpur, Malaysia, which will be attended by grassroots heads from the Member Associations.

To further promote and propagate grassroots football at the MA level, the AFC will be organising Grassroots Football Instructors' Courses in the regions of AFC with FIFA’s cooperation.

The AFC will also assist its MAs who need to develop their own Grassroots Framework Policy to guide them to sustainable grassroots football development initiatives.