Kuala Lumpur: Asia's top players will be determined to be at their best when they take on the finest in the FIFA World Cup Qatar 2022.

With the kick-off to the global showpiece fast approaching, the-AFC.com shines the spotlight on one key player from each of the six Asian teams who have qualified for Qatar 2022. Riyadh: AFC Champions League™ 2022 hopefuls Al Shabab FC have announced that they have agreed terms with Spaniard Vicente Moreno to coach the team next season.

“The club administration signed a one-year contract with Vicente Moreno and his assisting staff to coach the team,” said Al Shabab in an official statement. Dubai: As we approach the start of the new season across Europe and West Asia, clubs have been busy strengthening their squad over the past few weeks.

The-AFC.com recaps some of the biggest moves within the continent and for Asian players abroad this window.

Dubai: The return of the FIFA World Cup to Asia is just 120 days away as the continent prepares for a record of six Asian nations participating in the global event for the first time.

With hosts Qatar joined by Saudi Arabia and Islamic Republic of Iran as well as World Cup perennials Japan, Korea Republic and Australia, the-AFC.com takes a look at the state of play in the camp of each of the six teams four months before the big kick-off at Al Bayt Stadium. The 33-year-old shot-stopper has joined from Napoli following the expiry of his contract with the Italian Serie A side.

Ospina is Al Nassr's second signing of the summer after Ivorian left-back Ghislain Konan and is expected feature in the AFC Champions League™ 2023 following the club's third-place finish in the 2021-22 Saudi Pro League season. Dubai: Two decades on since Asia hosted the FIFA World Cup for the first time in its history and four months before the world’s eyes turn to the continent again as Qatar hosts the 2022 edition, the-AFC.com revisits Korea/Japan 2002.

With the two host nations qualifying automatically, the opportunity arose for the AFC to better its previous record of four teams in France 1998 as Saudi Arabia and China PR booked the two direct tickets to join the hosts, but it wasn’t to be.

Islamic Republic of Iran defeated the United Arab Emirates in the AFC Playoff to reach the Inter-Continental Playoff where they faced Republic of Ireland. Goals from Ian Harte and Robbie Keane in Dublin left Miroslav Blasevic’s men with a mountain to climb in the reverse leg at Azadi Stadium five days later, and a late goal from current Persepolis head coach Yahya Golmohammedi was not enough to overturn things, as Team Melli failed to join the four other Asian nations in the continent's first World Cup. Jeddah: Al Ittihad have appointed Nuno Espirito Santo as head coach until 2024, the Saudi Pro League side announced on Monday.

The 48-year-old Portuguese last worked with English Premier League side Tottenham Hotspur, leaving the club after 17 matches in charge. Al Hilal defeated Al Faisaly 2-1, finishing two points ahead of long-time leaders Al Ittihad, who at one point held a 16-point lead at the top of the standings. Al Ittihad were held to a goalless draw by Al Baten in their final match on Monday.
Al Hilal won the league title for the 18th time, thanks to a brace from Nigerian forward Odion Ighalo at the King Fahd International Stadium. Jeddah: Iraq defeated hosts Saudi Arabia 4-2 in the final to win the third edition of the WAFF Women's Futsal Championship on Friday.

Saudi skipper Leen Mohammed opened the scoring in the first period but Iraq fought back for the win thanks to a brace from Shokhan Salihi and one goal each from Direen Mullabakar and Tbarek Al Ghazawi. Jeddah: Al Hilal SFC are in pole position to retain the Saudi Pro League title after a resounding 3-0 win against Al Fateh on Thursday.

The reigning AFC Champions League™ holders only need to match Al Ittihad's result in their final game on Monday to lift the league title for the 18th time.

Both teams are on 64 points from 29 matches but Al Hilal top the standings on a better head-to-head against Al Ittihad.

Al Shehri: Saudi Arabia deserve to be champions as we were the best team Al Shehri: Saudi Arabia deserve to be champions as we were the best team

Tashkent: Head coach Saad Al Shehri was in a joyous mood after leading Saudi Arabia to their first-ever AFC U23 Asian Cup™ title, saying the victory was just the beginning of a successful journey for his players.

The young Green Falcons displayed great determination to overcome an Uzbekistan side that had the support of over 30,000 fans at the Bunyodkor Stadium, with Ahmed Al Ghamdi breaking the deadlock in the 48th minute, before Firas Albrikan sealed the 2-0 victory over the hosts. 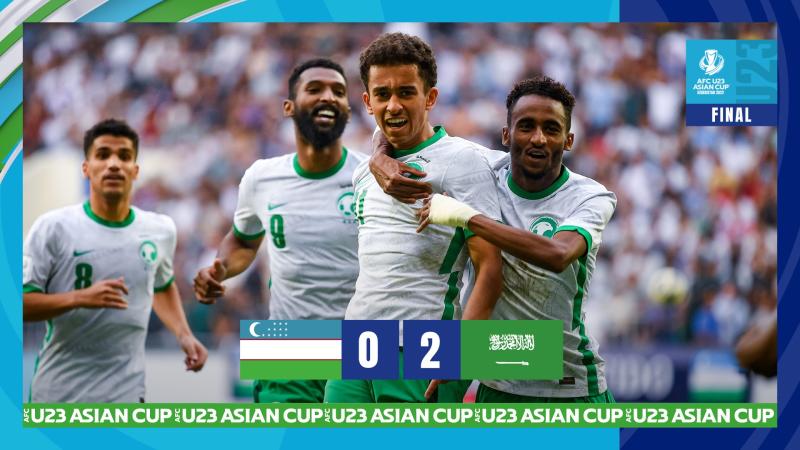