Denpasar: Meas Channa was full of praise for Visakha FC after the Cambodian side claimed a come-from-behind 2-1 win over the Philippines’ Kaya FC-Iloilo to mark their AFC Cup™ debut in fine fashion at Stadion Kapten I Wayan Dipta on Friday.

Kaya broke the deadlock half an hour into the opening Group G encounter when Arnel Amita headed home, but Visakha levelled proceedings shortly after the interval through Ken Chansopheak.

Sa Ty’s stunning effort from distance in the 59th minute then proved decisive as the Phnom Penh club got their maiden continental campaign off to a dream start. 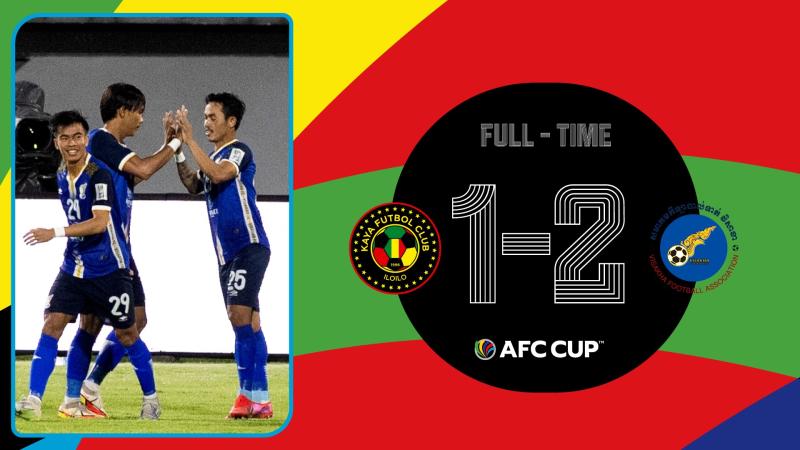 Denpasar: A stunning goal from substitute Sa Ty headlined Visakha FC’s 2-1 win over Kaya FC-Iloilo as the AFC Cup™ 2022 returned to action with the first match of the ASEAN Zone in Group G’s opener at the Stadion Kapten I Wayan Dipta on Friday.

An end-to-end start saw chances for both sides before Kaya forward Arnel Amita headed home the game’s first goal on 30 minutes, only to see Visakha's Ken Chansopheak level things up after the break. The stage was set for a bit of magic to decide matters and it was to come from the Cambodians as Sa Ty's 59th minute rocket settled the tie.

The Philippines, meanwhile, defeated Bosnia & Herzegovina 3-0 in Slovenia on Thursday. Denpasar: Kaya FC-Iloilo and Visakha FC are both determined to hit the ground running when they kick off their AFC Cup™ 2022 Group G campaigns at Stadion Kapten I Wayan Dipta on Friday.

Kaya are returning to the AFC Cup for the fourth time after featuring in the AFC Champions League™ 2021, while Visakha are set to make their continental debut.

Kaya coach Yu Hoshide believes the experience that the Filipino club gained from featuring in the Asia’s premier club competition, despite failing to pick up a point, will have put them in good stead for this year’s AFC Cup. After their success at the AFC Women’s Asian Cup™ India 2022 that saw them qualify for their first FIFA Women’s World Cup, the Philippines bagged the recent Hanoi SEA Games bronze medal by beating Myanmar. Ulaabaatar: Palestine claimed top spot in Group B with a perfect record and a ticket to their third consecutive AFC Asian Cup™ after their 4-0 win over Philippines on Matchday Three of the AFC Asian Cup 2023™ Qualifiers Final Round at MFF Stadium on Tuesday.

A pair of headers from Saleh Chihadeh and Tamer Seyam gave the Azkals a mountain to climb at the break before Mohammed Yamin added a third from a corner and Mahmoud Abuwarda fired in the team’s fourth to settle matters.

The result sees Palestine once again defeat the Philippines to qualify for the continent’s premier national team competition, having first done so by defeating the Southeast Asians at the final of the 2014 AFC Challenge Cup. Ulaanbaatar: MFF Stadium is all set to host the last pair of Group B fixtures in the AFC Asian Cup 2023™ Qualifiers Final Round on Tuesday with Palestine facing Philippines in a winner-takes-all match for top spot, while Yemen take on hosts Mongolia in the day’s later match.

Matchday Two on Saturday saw a contrasting set of results as Philippines edged Mongolia 1-0 before Palestine comprehensively defeated Yemen 5-0 to put Makram Daboub’s side in pole position in the standings. Ulaanbaatar: Philippines head coach Thomas Dooley has said his side are still alive in the battle for AFC Asian Cup 2023™ qualification after the Azkals secured a last-gasp 1-0 win over Mongolia at MFF Stadium on Saturday.

Having played out a scoreless draw in their opening game against Yemen on Wednesday, the Southeast Asians looked to be heading towards the same result against the Mongolians after Patrick Reichelt saw his 77th-minute penalty saved by Munkh-Erdene Enkhtaivan, only for debutant Gerrit Holtmann to score a 93rd-minute winner and seal the win for Philippines.

The victory moved Philippines to four points from two games and leaves them in second place in Group B ahead of their final game against table-toppers Palestine – who beat Yemen 5-0 – on Tuesday, when a win would see Dooley’s team advance to the continental competition as group winners. Ulaanbaatar: A dramatic 93rd minute winner from debutant Gerrit Holtmann kept the qualification hopes of Philippines alive as they secured a vital 1-0 win over Mongolia in their AFC Asian Cup 2023™ Qualifiers Final Round clash in Ulaanbaatar.

Whilst the loss formally eliminates Mongolia, Philippines now head into their final Group B match against Palestine in a strong position to reach their second AFC Asian Cup.

The hosts goalkeeper Munkh-Erdene Enkhtaivan was impressive throughout and after having saved a 77th minute penalty from Patrick Reichelt it looked as though he had earned the hosts a share of the spoils, only for Holtmann to pop up with the late winner. Ulaanbaatar: The four sides in Group B of the AFC Asian Cup 2023™ Qualifiers Final Round will return to action at MFF Stadium on Saturday as hosts Mongolia take on Philippines in the early kick-off before Yemen and Palestine face off in the second match of the day.

After the first round of fixtures on Wednesday, Palestine lead the way on the back of their narrow 1-0 win over Mongolia while Philippines and Yemen are tied in second place following their goalless stalemate.