Buriram: Head coach Kim Do-hoon was beaming with joy after his Lion City Sailors FC side secured a historic win over Daegu FC on Matchday Two of the AFC Champions League™ Group F on Monday.

Song Ui-young opened the scoring in the first half, with Diego Lopes and Pedro Henrique striking in the second half to seal the Singapore champions their first-ever win in the tournament.

Kim’s immediate reaction was to thank his entire team for their spirited performance at the Buriram Stadium, which places the Sailors back on track for a top place finish in the group that also has Shandong Taishan FC and two-time champions Urawa Red Diamonds. 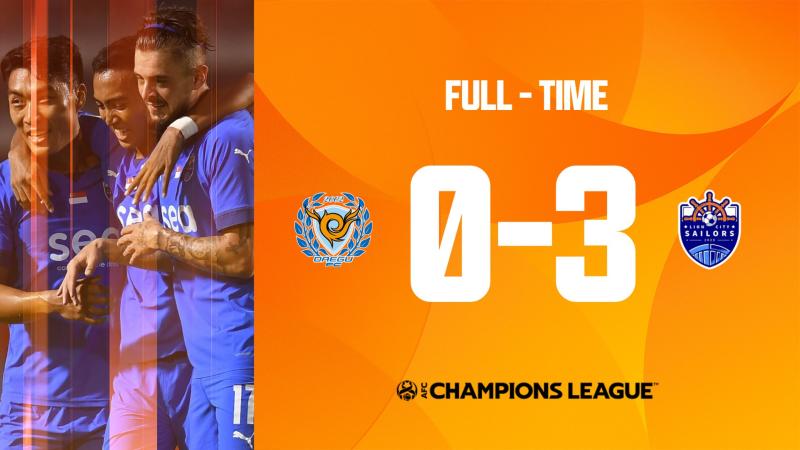 Pathum Thani: Makoto Teguramori said his BG Pathum United side has the potential to compete with the strongest sides in Asia, after they secured a 2-0 win over Korean FA Cup winners Jeonnam Dragons on Matchday Two of the AFC Champions League™ 2022 on Monday.

The Thai side took control of the match after half-time, with neatly constructed goals to Pathompon Charoenrattanapirom and Jakkapan Praisuwan securing three points and sending Teguramori’s charges to second on the Group G table, with only goal difference keeping them behind Melbourne City.

The win came on a night where clubs from Malaysia and Singapore also enjoyed success against Korean opponents and, when asked if he believes Southeast Asian sides are closing the gap on the traditional power nations of the tournament, Teguramori revealed his belief that BG Pathum United have all the ingredients to improve on last season’s Round of 16 finish, and challenge the continent’s best.

It was a historic win for the debutants from Singapore as they bounced back in style from their opening day 4-1 loss to Urawa Red Diamonds of Japan.

The defeat is a setback for Korea Republic side Daegu, who had kicked off their campaign with a resounding 7-0 win over China PR’s Shandong Taishan FC. The win kept two-time champions Urawa firmly in the driver’s seat in the group while Shandong suffered their second defeat in as many matches. The result saw Melbourne City climb to the top of the group on goal difference from BG Pathum United, while United City find themselves still searching for their first point, and first goal, following back-to-back defeats.

Pathum Thani: Second half goals from Pathompon Charoenrattanapirom and Jakkapan Praisuwan helped BG Pathum United to a 2-0 win over Jeonnam Dragons in Group G of the AFC Champions League™ 2022 on Monday.

The Korean FA Cup winners created better chances than in Friday's win against United City FC, but BG Pathum were rewarded for their relative composure in front of goal, leapfrogging Jeonnam on the group table as a result.

With four points from two matches, the Thai League 1 club remain on course to advance to the Round of 16 for the second consecutive year and will fancy their chances of adding to their tally when they meet United City on Thursday, while Jeonnam will look to bounce back against Melbourne City FC. Johor Bahru: Johor Darul Ta'zim continued their historic run at this year’s AFC Champions League™ with a spirited 2-1 victory over Korean powerhouses Ulsan Hyundai in a captivating battle at the Sultan Ibrahim Stadium, which solidified the reigning Malaysian Super League champions’ claim for top spot in Group I.

Johor Bahru: Kawasaki Frontale cruised to a resounding 8-0 victory over Guangzhou FC as the Japanese side sent a clear message of intent to their AFC Champions League 2022™ Group I rivals at the Tan Sri Dato' Hj Hassan Yunos Stadium on Monday.

Guangzhou FC head coach Pan Yonghe had called for his young charges to adopt a calm and composed approach in the lead-up to Match Day Two but a dominant first-half display by Toru Oniki’s men saw them race into a four-goal lead after just 25 minutes.